7 ways to tell if an interview went well

Home 7 ways to tell if an interview went well 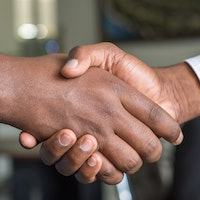 You've just walked out of an interview for a job you really want, sighing with relief and heading home with a spring in your step, imagining yourself making the commute to your new office and getting settled into your perfect role. But it isn't long before the self-doubt starts to creep in, and you find yourself overanalysing every answer you gave, wincing at some of your responses, reading into every subtle facial expression and offhand remark, kicking yourself for not saying the thing you told yourself you had to remember to say... We've all been there, and the post-interview analysis can be as stressful as the event itself. Fortunately, there are a few clues that could indicate whether you've got this in the bag...

1. The interview lasts longer than scheduled

Usually, a hiring manager or recruitment agency will say in your interview confirmation or at the beginning of the interview roughly how long they expect it to last. If you find the interview going on longer than the given time, it’s a definite good sign. Most hiring managers are busy people and interviewing several candidates takes serious time. They’re unlikely to spend additional time with you unless they’re genuinely interested in hiring you.

2. They describe the role as if it's yours

This one can be quite subtle, but many interviewers who are feeling positive about the candidate in front of them will say things like, 'You'll be working on this' or 'You'll need to do this', as if they already envision you as being successful in your application for the role. Hiring managers who are less convinced might say things like, 'Someone in this role will...' or 'The successful candidate would be...' The more the language reflects the role as yours, the more likely it will be offered!

3. The spend time trying to sell you the job

When an interviewer is interested in an applicant, they will usually spend a good deal of time trying to elaborate on the positive aspects of the role and company, and the perks of joining the team. An interview is a two-way process, and if they want you, they will try very hard to make you want them too! It’s an even better sign if they actively link back to how the role matches your skills, interests and ambitions. It means they want to make the position work for you – not just any candidate.

4. The conversation feels natural and comfortable

While it's easy to forget when your nerves are running high, interviews are human-to-human conversations at their core. If your interaction flowed more like a natural discussion and less like an interrogation, that’s a positive. Polite small talk and some friendly back-and-forth indicate that the interviewer was not only interested in you, but also felt a certain level of comfort. If they were sitting up straight, keeping up an encouraging amount of eye contact and smiling lots, these are all signs that they felt engaged and connected.

5. They want you to meet the team

"Very often, when an interview is going well, the hiring manager is keen to bring other people into the process," says Rebecca Bannerman, a director at Amber. "Whether that's immediately by inviting additional people into the room, or just by mentioning how keen they are for you to meet specific people, it's a great sign they can picture you in the role. After all, there’s no need to make introductions for people that definitely aren’t getting the job. Meeting a few people from the company, either during the meeting or after, is the first step in bringing you on board as an employee."

6. They encourage your questions at the end

We all know that we need to go into an interview prepared to ask some pertinent and well-researched questions at the end, and every good interviewer will welcome this as part of the process. But if they are particularly interested in you as a candidate, the chances are they'll take a good deal of time responding to your questions with care and consideration, and will positively encourage you to use the time at the end to address your queries, concerns and reflections. If your interviewer was engaged and enthusiastic during your closing questions, that's a great sign.

7. They describe the next steps and ask when you can start

Of course, establishing a candidate's potential start date is usually one of the set questions on the interviewer's schedule, but you can generally tell if they're asking it to tick a box or because they're already mentally slotting you into the team. If your interviewer quickly asks this in addition to a number of other generic questions, they’re probably just going through the motions. However, if they ask it alone, and follow up with other questions or comments about your availability, it could be a sign that they’re considering employing you (and are willing to work around your schedule if necessary). Another great indicator of how well your interview went is how they explain the next steps. This, too, is usually part of the interview structure and everyone will benefit from the explanation, but if your interviewer went into detail about the hiring timeline and what you could expect to happen next, that means they’re interested and want you to be in the loop on what’s coming up.

How can we help you?

If you're looking for your next professional opportunity in Surrey, please give us a call on 01932 355000 or email hello@amber-employment.co.uk to find out how we can help.

Be notified when we add new articles

Amber Employment Services offer a professional and reliable recruitment solution. Their continued success within our organisation is through the careful selection of high calibre candidates and a thorough understanding of the business requirements. We would have no hesitation in recommending them.

It's not often I'm lucky enough to feel compelled to write and say thank you to a recruitment consultancy, but I want to say well done and a big thank you to the team at Amber. Not only did you quickly and easily understand our person specification and job description, but you filled our vacancy with an ideal candidate. This is particularly impressive given that the sector we work in is very specialised and consequently, in the past, we have only ever used very specialist companies to recruit for us. In the future, I will have no hesitation in appointing Amber to look for any further more specialised vacancies that arise. You have always comprehensively met our recruitment needs for general office staff, but I am delighted that we can now place all our vacancies with Amber with confidence.

Out of all the agencies I went to, Amber has been an inspiration to me. You never gave up the fight to find me a role and you knew my personality and what I was looking for. You know what you are doing and how to get it done. Thanks again for your help, support and most of all your determination.

Amber has taken the time to understand my requirements, my career history and what I want for the future. The most noticeable quality that differentiates Amber is their understanding of the importance of communication at such a sensitive time. My 10 month placement is coming to an end and I look forward to my future with the helping hand and support from the Amber team. I would recommend them to anyone looking for work. Thank you for all your hard work.

I am pleased to say by using Amber we have just completed a very successful recruitment programme to find three new staff. My sincere thanks for conducting business in a smooth and professional manner; understanding the brief, listening to my guidelines and appreciating the company culture. As a result - an enjoyable and rewarding process, a point echoed by the candidates who equally had very positive feedback. Amber is a welcome change after previous disappointing experiences in the world of recruitment, and I would certainly recommend them.

My company has been using Amber for many years, both for permanent recruitment and to fill temporary vacancies. The consultants at Amber have always listened to and understood the brief for our vacancies and this has been shown by the high quality and suitability of the candidates they have put forward. Amber are the sole agency we use to fill our temporary vacancies; they always send someone that is suitable and reliable. We trust their judgement completely, never needing to interview for a temporary vacancy, and have never been disappointed.

This site uses cookies to store information about your computer.

These cookies are necessary for the website to function and cannot be switched off in our systems. They are usually only set in response to actions made by you which amount to a request for services, such as setting your privacy preferences, logging in or filling in forms. You can set your browser to block or alert you about these cookies, but some parts of the site may not work then.

These cookies allow us to count visits and traffic sources, so we can measure and improve the performance of our site. They help us know which pages are the most and least popular and see how visitors move around the site. All information these cookies collect is aggregated and therefore anonymous. If you do not allow these cookies, we will not know when you have visited our site.